One of the most common arguments against e-cigarettes is that they’ll tempt non-smoking youths into trying nicotine, and those youths will eventually move onto combusted tobacco. This is also a hypothesis that’s been routinely trounced by studies investigating the potential issue, which have all found that the overwhelming majority of vapers – youth or not – are current or former smokers. A new survey of Minnesota-based middle and high school students has provided further evidence that the potential gateway to tobacco is not a genuine concern, but, as is the pattern with such studies, it’s being presented as showing the exact opposite.

So it’s clear Dr. Ehlinger isn’t the most reliable source here (after all, there are a handful of tobacco companies in the industry compared to hundreds of independent businesses), but how much nonsense is he actually talking?

The Survey – Monitoring Youth Tobacco Use in Minnesota

This is the sixth Minnesota Youth Tobacco Survey, with the first having been conducted in 2000 and the most recent in 2011. The aim is to evaluate youth use of tobacco (or “tobacco products”) and monitor the effectiveness of their various prevention efforts in place. This is the first time the survey has asked questions about e-cigarettes, and (as is common with such surveys) classes a current user as anybody who’d vaped within the past 30 days, even if only once. At least in this case the same criteria is applied to more conventional tobacco products (i.e. actual tobacco based ones) and cigarettes. The major finding of the survey concerns cigarettes and conventional tobacco products, which both showed the sharpest decline in the history of the survey. In 2011, 18.1 percent of high school students had smoked a cigarette in the past 30 days, compared to just 10.6 percent in 2014 (for middle school, the rates were lower all-round – just 1.6 percent had smoked in the past 30 days in 2014). For all conventional tobacco products (including cigars, cigarillos, pipes, smokeless tobacco and cigarettes), past 30 day use went from 25.8 to 19.3 percent over the same period for high schoolers (again much lower for middle school students – 3.6 percent in 2014). Additionally, use of cigar-style products (specifically) declined for the first time in the history of the survey. The report makes it clear – to its credit – that some of those who’d vaped in the past 30 days are likely to have just being trying it out, and won’t continue to use it. This is a critical point that has been roundly ignored by most authors of studies like this, and the survey authors even point out that the survey doesn’t provide sufficiently detailed information as to how often the “current” users are actually vaping. Why it doesn’t isn’t addressed, though, because you’d have thought one or two extra questions wouldn’t be that difficult or impractical to include.

One point they didn’t address is that they also don’t know (or at least didn’t mention) how many of the never-smokers who’d vaped at least once before used nicotine-free e-liquids, which other surveys suggest would be about half of them. They spend plenty of time talking about the risk of non-smoking youth developing nicotine addiction, but apparently didn’t care enough to actually ask about nicotine content.

The survey also found that 57.4 percent of high school students had been “exposed” to e-cigarette ads on TV in the past 30 days, 47.5 had seen advertisements in convenience (or other) stores and over a third had seen them on the internet. This all led Dr. Ehlinger to comment on how “tobacco companies” are using “well tested marketing techniques” to introduce young people to nicotine. However, the survey itself points out the importance of home and peer influences, finding that students who are smokers are seven times more likely to have at least two smoker friends and twice as likely to live with a smoker. An analysis for “exposure” to e-cigarette marketing and likelihood of e-cig use wasn’t provided, so it likely had a weak or non-existent association. 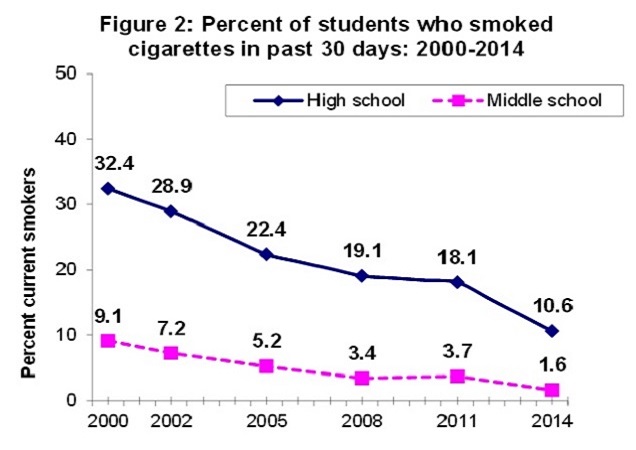 The most interesting thing about this study is that more students vaped than smoked, and smoking rates among high-schoolers declined faster than it has in the entire history of the study, alongside an apparent increase in vaping. This is only “apparent” because technically speaking this is the first time they’d asked about e-cigarettes in this survey, so they have no past figure to compare it to other than national ones. However, given that e-cigarettes are becoming more popular, it makes sense to assume the decline in smoking has been accompanied by a drastic increase in vaping.

As Carl V. Phillips pointed out in response to another study, there are many variables affecting the number of smokers, so the fact that e-cig use increases while smoking decreases doesn’t necessarily mean e-cigarettes are causing the decrease. However, as is plainly obvious, that is one potential explanation for the coinciding trends, and it’s obviously quite a plausible one. So while this doesn’t definitely indicate that vaping is causing drastic reductions in youth smoking, it is fully in line with the hypothesis.

Additionally, if you look at conventional tobacco use and e-cigarette use together, the rate of use has remained steady at around 24.2 percent. Again, this is fairly consistent with the idea that e-cigarettes are replacing combusted tobacco use in youths, because while the overall number of recreational nicotine users has remained steady, the findings indicate a shift to lower-harm options. In fact, e-cigarettes now appear more popular than tobacco cigarettes in this sample. If you’re of the very reasonable opinion that e-cigarettes are much, much safer than combusted tobacco, this is excellent news. We don’t want kids to consume nicotine, but if they are going to do so (which they obviously are), it’s best they do it in as safe a way as possible.

So, trying to twist this study against e-cigarettes requires some mental gymnastics, to say the least. Yes, the number of current high school age vapers is pretty high, more so than in other research on this topic, but the number of smokers has drastically declined. Although this survey is not definitive evidence that vaping is responsible for this decrease, it’s exactly what you’d expect to see if it was. Of course, any opportunity to make a big deal out of apparently rising youth e-cig use won’t be missed by opponents to the technology, but in this case, any rational observer would see it as a good thing.