After a great deal of controversy the last time Five Pawns’ juices were tested, the company has now released new test results. The findings – which in the previous test showed up to 2,500 ppm (or 2,500 μg/ml) of acetyl propionyl (AP) in Absolute Pin – now show vastly lower levels of the chemical. So what’s going on? Has Five Pawns (secretly) re-formulated their juices to address concerns? Or is there something else going on? As we pointed out in our last article on the topic, it seems that a crucial difference may be the testing protocol used.

DA and AP in Five Pawns E-Liquid: The Results

Five Pawns, to their credit, has now committed to conducting tests of their e-liquid every quarter, on juices pulled randomly from the production line. They added that, “As the past 12 months of test results show, we are always innovating and will continue to evolve our products with ongoing testing.”

So let’s look at all the results Five Pawns has available on their website, remembering that 65 μg of diactyl (DA) and 137 μg of AP per day are the closest thing we have to a recommended maximum.

The first available set of results date back to May 2014, with the testing (for DA only) conducted by Newport Scientific – using gas chromatography and flame ionization detection (GC-FID) – and are as follows: 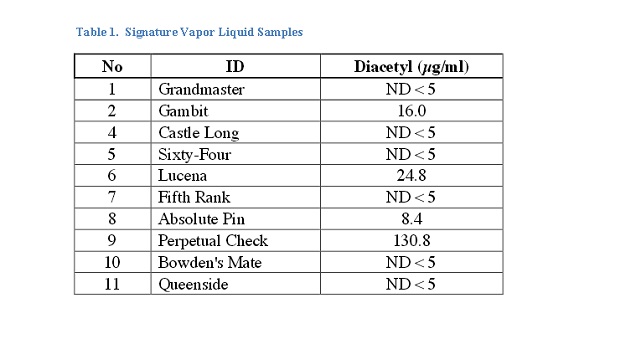 The only set of results using gas chromatography mass spectrometry (GC-MS) were released in October 2014, and were conducted by S & N Labs. Here are the results: Perpetual Check is still fairly DA-heavy, but not as bad as previously. However, the AP (2,3-pentanedione) results are outrageous across the board, with four juices putting you over the recommended limit in even half a ml, Grandmaster being very close to the limit in 1 ml and three others being problematic for anybody who vapes over 2 ml of the juice.

The next set of results come from later in October 2014, and are a combination of the previous results and some new ones from Newport Scientific. This means that some results use GC-MS (indicated with a *) and the others use GC-FID for testing.

The notable difference is with the Bowden’s Mate results, which – when tested by Newport with GC-FID – show less than 5 μg/ml of DA/2,3-butanedione (the closest to “none at all” we can conclude) and much less AP (although still way too much).

Absolute Pin, Gambit and Queenside still contain worrying amounts of AP (which is almost certainly risky to inhale, despite Five Pawns’ limp assurances in the wake of the recent scandal), and Lucena, Bowden’s Mate and Grandmaster would still be potentially problematic for anybody who uses them as an all-day-vape.

What’s Going on? A Look at Testing Methodologies

So, which results are reliable? As we covered in the last post, there are potential issues with GC-FID when used for oxygen-containing molecules (such as DA and AP). The apparatus needs to be correctly calibrated for individual components, or the readout can show misleadingly low levels for DA and AP (and other ketones).

Five Pawns states that, “there is currently no standardized or approved methodology for testing e-liquids,” but is open about both the limit of detection and the method they used. However, the (implicit) idea that the lack of an agreed-upon method means GC-FID is fine is a little suspect. The Electronic Cigarette Trade Association of Canada recommends high-performance liquid chromatography (HPLC) – but also mentions GC-MS as a suitable approach – and the Electronic Cigarette Industry Trade Association also recommends GC-MS testing, with neither claiming that GC-FID is a suitable method for testing for DA and AP.

The American E-Liquid Manufacturing Standards Association (AEMSA) doesn’t mention which testing method is appropriate in their standards, but works with Enthalpy Analytical, which also tests using GC-MS (and again, makes no mention of using GC-FID for DA or AP detection).

It appears that, contrary to Five Pawns statements, there is something of a standard, and the reasons for that seem likely to be the potential issues with GC-FID testing when not properly calibrated. The simple question is: what is Five Pawns’ rationale behind choosing GC-FID? The lab they use, Newport Scientific, does offer GC-MS as a service (and HPLC is available through them too).

I’ll add the disclaimer again that I’m not an expert in this area, but it appears that GC-FID is not recommended by anyone relevant as a method for testing for chemicals like DA and AP. It can be done correctly (and any results have some inherent variability), but it seems like using an approach with less risk of bias is just common sense.

This would all seem to suggest we should be more inclined to trust the results of GC-MS tests (like the now-retracted Cloud 9-comissioned results and the ones above showing the higher AP levels), but the huge variability between individual findings makes it difficult to be sure.

Has Five Pawns Re-Formulated Their Juices?

Of course, the new results showing much lower AP levels could be because Five Pawns has made some major changes to their recipes, as they suggested in their new blog post. However, a cursory comparison between the October 2014 results – focusing specifically on the four GC-FID results to aid comparisons – and the new ones doesn’t really inspire too much confidence.

The AP levels detected in Castle Long and Bowden’s Mate have decreased, from 75.7 to 21.1 μg/ml and 627.7 to 68.1 μg/ml respectively, but the results for Absolute Pin and Lucena are exactly the same (as are the DA results for Perpetual Check).

At very least, this means that they opted to change the recipe for two juices (which seems probable due to the huge difference in Bowden's Mate, in particular), but left Absolute Pin containing over twice the recommended AP intake in a single ml. Moreover, this would mean that they felt the need to change Castle Long, which only had 75.7 μg/ml of AP to start with, but left Gambit, Absolute Pin and Queenside as they were, despite the fact that they contained more AP than this. Lucena also contained 74 μg/ml, so you’d have assumed this would be considered for reformulation too.

The identical results obtained for some juices appears to be because the new results are a mixture of some tests for the third quarter of 2015 and some old results from the past 12 months – as indicated by the title of the document in Five Pawns’ blog post. The report also states, “The listed results are a summary of reports provided Five Pawns by Newport Scietific.” (No, I didn’t make that mistake; Newport Scientific left a typo in the report, and not just one either) The other reports clearly state the date of the testing, so the fact that this one doesn’t probably means the identical results really are identical results. In which case, the question is: why did they not test the other juices again, or why did they not show us?

However, this speculation is clearly unnecessary. If the results are all new (as implied by the blog post) and Five Pawns has reformulated their juices, they have done so in a spectacularly senseless fashion anyway.

Still Not Building Too Much Confidence, Five Pawns

So Five Pawns has almost taken a step I’d congratulate, but the execution is massively off. We are left with several very important questions. Why test using GC-FID when nobody recommends doing so for DA and AP? Why are some of the results in the “new” tests identical to those in the old tests? If they’ve reformulated the recipes, why change Castle Long, but leave Gambit, Absolute Pin and Queenside as they were? And if they’ve reformulated their juices to address concerns, why would they leave us to infer this from the lab test results rather than making a huge deal about it?