Home › Blog › Countries Where Vaping is Banned and Why

It’s hard to see why anybody who was aware of e-cigarettes and has done some basic research on them could possibly conclude that they should be banned, but several countries have made that exact decision. You might be wondering why anybody would move to ban something with so much potential to reduce the harm associated with smoking, but the reasons don’t really stand up to much scrutiny. Here’s a list of the countries where e-cigarettes are banned, and a look at the most common reasons.

[Note: We've updated this post as of December 2015 – check out the new version here]

Which Countries Have Banned E-Cigarettes? 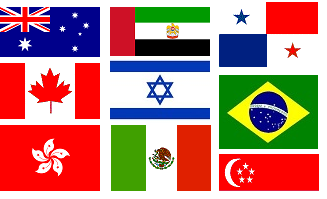 The e-cigarette is a relatively new phenomenon, so in most places legislation is yet to really catch up with the technology. However, countries like Canada, Mexico, , Israel, Brazil, Hong Kong, Panama, Singapore and the United Arab Emirates have completely banned e-cigarettes. They are also regulated heavily as medical products in Denmark, where they are technically illegal but none have been licensed so far. Some places, such as Finland and Australia, have rules where they can technically be sold, but can’t contain nicotine. Many countries also have marketing bans on all nicotine products, which cover e-cigarettes.

One of the most common reasons for banning e-cigarettes is typified by the situation in Brazil. The FDA report issued in 2009 is thought to have been instrumental in the decision, and it basically boils down to the fact that e-cigarettes haven’t been studied in depth. This is true, and more research evidently needs to take place with regards to the risks of e-cigarettes. However, based on the existing research you can draw the conclusion that vaping is much safer than smoking. This argument can be summarized pretty simply: we can’t quite say with certainty that e-cigarettes aren't safe, so you can keep using tobacco cigarettes, which we definitively know to be dangerous.

The Canadian e-cigarette ban was justified in a different way. It is argued that e-cigarettes increase the risk of nicotine overdose. It’s important to note that there is no such ban on smoking an inordinate amount of cigarettes in one sitting. Nor is there a ban on caffeine, which is also dangerous if consumed in inordinate amount. In fact, if you have enough of most things, overdose is actually quite likely. If e-cigarettes are used correctly (as much as you would use a cigarette), there is obviously no risk of overdose. Anything can be damaging if misused.

In Panama, they banned e-cigarettes in 2009 because of a now infamous FDA study. They looked at two brands of e-cigs, with 19 cigarettes in total, and found trace amounts of diethylene glycol in one of them, and also some tobacco-specific nitrosamines. The FDA, however, neglected to mention that the nitrosamines (which are carcinogenic) are pretty much inevitable in any produce derived from tobacco, including FDA-approved gums and patches. Diethylene glycol is also found in aspirin in ten times the quantity and hasn’t been found in subsequent tests.

The poor reasons cited for banning e-cigarettes are particularly harmful because they essentially leave tobacco as the only option. Realistically, the legislation could be seen as over-protective, but unless it’s accompanied by a ban on tobacco this argument crumbles into nothingness. Countries should support their citizens’ freedom to choose, and by no means ban something with the potential to save so many lives.

Compare to Smoking Bans Around the Globe in 2009