10 Things to Know About Diacetyl in E-Juice Black Note has recently published two posts looking at the issue of diacetyl in e-cigarettes, with one covering the science behind the debate and the other focusing more on the disagreement on the issue within the vaping community. The posts are both well-worth reading – so go take a look if you want the full story – but we’ve condensed some of the key take-away points here.

If you think you never vape diacetyl-containing juices, you’re probably wrong. If you love sweet-flavored juices – like most vapers do – then you’ll almost certainly be consuming some diacetyl. In Dr. Farsalinos’ February 2015 study of diacetyl in e-juice, about three-quarters of the sweet-flavored juices tested contained them. This brought the issue to the attention to more of the vaping community, but when the recent Harvard study came out in late 2015, around the same proportion of tested flavors contained it. More and more vendors may be ditching diacetyl, especially since the latest study weas released, but to pretend it’s dropped below 50 percent of eligible juices would just be wishful thinking.

Most vapers will undoubtedly already be aware of this, but diacetyl is present in cigarette smoke, and the levels of diacetyl there are actually much higher than in e-juice. This point was widely missed (or, probably more accurately, ignored) by journalists reporting on the latest study, but it’s absolutely crucial: you’re still reducing your risks if you vape diacetyl-containing e-liquid.

One of the most widely-cited figures by those pointing out the higher levels of diacetyl in cigarette smoke was that smokers consume 750 times more diacetyl than vapers. As the figure got passed around, it was increasingly implied that smoke contains 750 times more diacetyl than vapor. The reality, though, is that the figure was calculated by Michael Siegel based on a day of vaping vs. a day of smoking. The big limitation is that it’s based on a consumption of 1 ml of e-liquid per day. This is a big underestimate for most vapers. Using an assumption of 5 ml per day, it would be more like 150 times less per day.

4 – Smokers May Not Get Popcorn Lung, But That Doesn’t Mean Vapers Are Safe

The previous point is often followed up by the observation that smokers don’t even get popcorn lung, and this seems like a devastating argument. Surely diacetyl in e-cig vapor isn’t anything to worry about, then? Not necessarily. As Dr. Farsalinos points out in the article:

We have addressed this issue in our paper on diacetyl which was published in September 2014. We should not forget that cigarette smoke contains not only diacetyl (at high levels) but also many more respiratory toxins. The combined exposure to these toxins can lead to a different form of respiratory disease, Chronic Obstructive Lung Disease. Also, it is important to stress that Chronic Obstructive Lung disease is much more common in smokers compared to popcorn lung disease in those exposed to diacetyl in the occupational setting.

As tiresome as it is to hear, time and time again, how we “just don’t know enough” about the potential risks of vaping, it’s very much the case when it comes to diacetyl in e-juice. As Carl V. Phillips points out in his post about the issue, the available evidence (although it all points in the same direction), tends to involve exposures to multiple chemicals at much higher levels than in e-juice. He says that any estimates of the risks for vapers involve “heroic guesses.” Many agree with Dr. Farsalinos’ point that diacetyl is an “avoidable risk” for vapers, but it’s important to remember that we don’t definitely know whether there will be a risk to vapers.

Despite the uncertainty stemming from the limitations of the currently available evidence, the data we do have suggests that the amounts of diacetyl detected in e-juice aren’t a cause for major panic. The evidence from factories – where workers are exposed to cocktails of chemicals – generally found reduced lung function and not much else.

The National Institute of Occupational Safety and Health sets workplace limits for diacetyl based on the amount that would lead to a 1/1000 chance of developing airway obstruction after 45 years of exposure. Many e-juices would expose vapers to more than this limit, but it’s clear that the risks are still fairly remote, and pale in comparison to those of smoking.

7 – Acetyl Propionyl is Probably Just as Bad, But Acetoin is OK

Acetyl propionyl and acetoin are two chemicals commonly used as a replacement for diacetyl, but whether they’re safer alternatives is up for debate. For acetyl propionyl in particular, there is evidence that it’s just as bad as diacetyl, although we don’t have any data outside of lab studies on rats and mice, which is very difficult to apply to humans. For acetoin, the evidence so far doesn’t suggest a risk for inhalation.

8 – Vapers Want Transparency from the Industry

In the article, they speak to several prominent vapers (including Grimm Green, Russ Wishtart of Click, Bang!, James Dunworth from E-Cigarette Direct, Morton Moe of the Vaping Giraffe and others), and there is broad agreement that what’s needed from the industry is transparency. We can accept the uncertain risks of diacetyl – the fact that we vape at all means that we’re fairly happy with uncertain risks – but we should be informed that we’ll be taking these risks. If vendors tell us if their juices contain diacetyl, then we can decide for ourselves whether we mind inhaling it. Pretending your juice doesn’t contain it but then being found to use it is a guaranteed way to annoy vapers (as Five Pawns will undoubtedly have realized).

9 – And There Are Plenty of Companies That Offer It

The good news for the industry is that many companies clearly do value transparency, and have either opted to remove diacetyl from their juices or have published full test results showing whether their juices have diacetyl, and if they do, how much there is. Companies involved with the post like Black Note, E-Cigarette Direct’s Halo brand, Mt. Baker Vapor and NamberJuice, as well as vendors such as Vapor Shark have either removed diacetyl or made test results widely available. 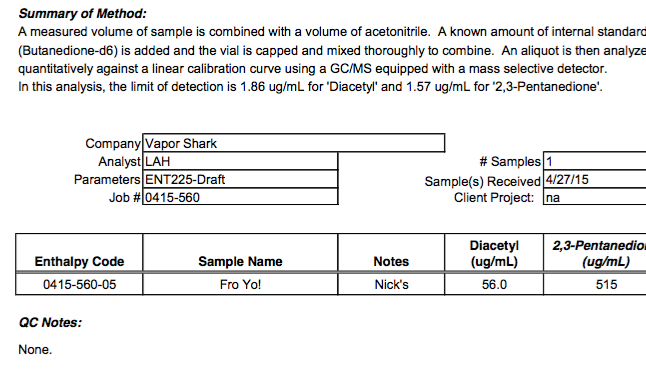 Finally, if you’re looking for diacetyl-free e-liquid, there’s only one way you can be sure you’re getting it: check out the lab report. Previous instances of companies claiming to be diacetyl-free but actually not being should have tipped you off: only hard evidence will do; not weak promises.

Conclusion – Diacetyl is a Thorny Issue, But an Important One

So diacetyl probably isn't a killer lurking in your e-juice – and we might not really be that sure how bad the levels in e-juice are likely to be – but the issue is important, nonetheless. The reason is simple, and something that doesn’t really bode too well for the industry: companies had the opportunity to remove diacetyl or at least be up-front about it for the past couple of years (if not more), but it is still an issue with many brands of juice. We need to praise those who are doing things right – and vote with our wallets by buying juice from them – but more importantly, put pressure on those who really are making the industry look like it’s the Wild West.